I am honored and thrilled to report that I have earned Equality NC’s endorsement! 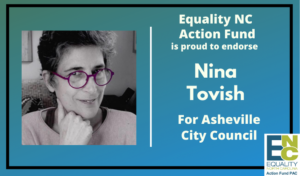 For more than four and half decades I have supported and advocated for the rights and fully-realized, beautiful lives of LGBTQ+ people. Since moving to Asheville, I’ve participated in public demonstrations, and written letters to state & national legislators. I donate monthly to the ACLU.

Do you support Medicaid Expansion, Medicare for All, or other proposed or potential healthcare policies without work reporting requirements or additional cost-sharing? Please explain your position.

Yes. It’s appalling that North Carolina hasn’t expanded Medicaid. I’m one of those people at risk of falling into the ‘gap,’ so I’m personally familiar with the problem. In order to fully address one of the great challenges facing Asheville — the desperate situation of our houseless neighbors — we will need support from the state and national levels. Without Medicare for All or another comprehensive solution (and probably a Universal Basic Income too), municipalities will never be able to afford all the supportive services (including mental health care) needed to ensure everyone has a safe home and access to healthcare. As a municipality, Asheville can and must take important steps to mitigate the suffering, and we should begin immediately, but City Council cannot solve this problem on its own.

Considering the number of hospitals and health care providers decreasing, specifically in rural areas of NC, how would you support and advocate for comprehensive health care in rural counties?

My understanding is that City Council has essentially no role to play in supporting health care in rural counties — except to the extent it coordinates with Buncombe County, which might allow the County to deploy more services to rural areas.

Are you Pro-Choice? Would you support legislation guaranteeing access to abortion care without dangerous delay, isolation, or obstruction?

I am, and have been my whole life, vehemently pro-choice. The choice to carry a baby to term is, and should always be, in the hands of the person whose body is doing all the work.

Do you support comprehensive sex education, including curriculum relevant to LGBTQ+ students?

Absolutely. We’re seeing a disastrous trend all around the country of laws and school boards trying to pretend that human sexuality and family structures are anything other than a glorious spectrum of difference and diversity. Children need clear, kind, honest and generous explanations of how people love one another and how all sorts of bodies function. They can handle it! Good sex education empowers young people to make good decisions.

Asheville’s Board of Education will be elected this cycle, so City Council will no longer be appointing Board Members. I believe there are nine candidates for five seats.

Do you support increasing educator pay in the public school system?

North Carolina ranks 33rd in the US for teacher pay, which is shameful. Unfortunately, other than being an outspoken advocate, City Councilmembers have no power to set pay in Asheville City Schools — that happens on the County level.

What is your position on school vouchers and the use of public tax dollars to support private schools that may discriminate against LGBTQ students?

In my view, the state has no business allocating tax dollars to private schools at all. Public funds should stay in public schools. That those private schools may discriminate or promote a harmful agenda toward LGBTQ students just makes the idea worse.

What will you do to create more trans inclusive sport spaces in public schools? How will you create space for students to play in alignment to gender identity?

I’d like to see the City of Asheville consider developing programs, perhaps under the umbrella of Parks & Recreation, that would create gender-affirming athletic and play opportunities.

Because North Carolina is a “Dillon state,” the City of Asheville cannot impose any minimum wage different from the State, never mind a living wage. Just Economics calculates an average living wage in Buncombe should be $17.70/hr.

Perhaps there are some creative ways the City could incentivize businesses to pay a living wage — something along the lines of a tax rebate, maybe. There are definitely legal challenges; I’d like to see us consider putting the matter to a test.

Do you support paid family and medical leave as a universal right? If so, how much?

As a goal, on the state and national level: yes, absolutely.

As a municipality, however, Asheville simply cannot currently afford to take up the entire burden of a severely broken healthcare system. Currently, the City offers employees each year: 12-15 days paid sick leave, 12-25 days of paid vacation, and access to a “sick leave sharing bank.”

Is that good enough? Probably not. This is a budget priority question for which I do not have a simple answer.

Are you supportive of labor unions and collective bargaining for private and public employees?

Yes. I also believe that public employees should be open to a higher level of public scrutiny. Transparency and accountability are essential to a democratic government.

Asheville City Council passed a nondiscrimination ordinance in April 2021. This was an important step locally, and I hope that the advent of this ordinance will actually mitigate discrimination, and provide effective avenues of redress for those who experience it.

I hope that there will be follow-up to determine if and how this ordinance is being used to ensure equality in employment and places of public accommodation.

This other prong of HB142 needs to go, but only the State legislature can do that. I support Asheville City Council passing a resolution urging its elimination.

Please tell us your plan to reduce gun violence.

How I wish I had the magic solution to this deep-seated problem in American society!

We are a culture in love with guns (and our entertainment is rife with gun violence); gun ownership is embedded in our Constitution. While I strongly favor more effective gun regulation and enforcement of those regulations, ultimately I believe that our gun violence problem can only be overcome by a generational change in attitudes.

Locally, perhaps we could try a gun amnesty program, preferably in collaboration with the County, where people could turn in firearms.

Ultimately, gun violence is a symptom of other underlying problems: an economic system that doesn’t provide enough opportunity for all, an illegal drug economy and mental health crisis that devastates lives and communities. On the City level, more policing is not going to solve the problem; better opportunities and deeper social services may mitigate it somewhat.

Comprehensive Democracy Reform also includes voting rights restoration for people with felonies, voter registration modernization, Election Day registration, campaign finance reform, and releasing funds for county boards of election. How would you lead on any of these issues?

I have been heavily involved in voter registration and get-out-the-vote efforts since I’ve been in Asheville. Fortunately, our Buncombe County Board of Elections does a very good job in supporting voter access and making early voting accessible to citizens.  I will continue to lend my support to our state legislators who are working to prevent new restrictions on voting access and striving to extend protections and access for all citizens.

I’d propose making Election Day a vacation day for City employees, and encourage Asheville businesses to do the same.

Would you support housing incarcerated transgender individuals with the population they deem to be the safest option?

Every incarcerated person deserves to be safe. I support compassionate housing that responds to need for bodily safety of all persons serving sentences in prison.

Please tell us how you are reimagining public safety.

The American love affair with the gun is especially evident in the heavily armed posture of our police force. When fully kitted up, our municipal police look ready to storm Fallujah.

People who are dressed for war naturally feel themselves to be embattled — why else would they be armed to the teeth with a gun, multiple clips of ammunition, body armor, and a taser? And why tote all that stuff around if you’re not supposed to use it, right?

I support a transformation of our police force through a genuine cultural shift: deep training in de-escalation and non-violent conflict resolution; limited provision of firearms to the police force, a much greater emphasis on non-lethal methods, and a deeper education in civil rights of the public. I’d like to see cooperative teams of police and social service providers, with armed officers deployed only in the most serious scenarios.

I’d like to see much more casual community interaction between police and the citizenry (not ‘civilians,’ because we’re not the opposite of a military force). Police in Asheville should be better paid, so that they can live in the communities they serve, and so that we can appeal to the best educated, most qualified officers. High quality policing is about high-quality personnel, not about a bigger arsenal or more powerful vehicles.

Please share this with your friends!
Go to Top