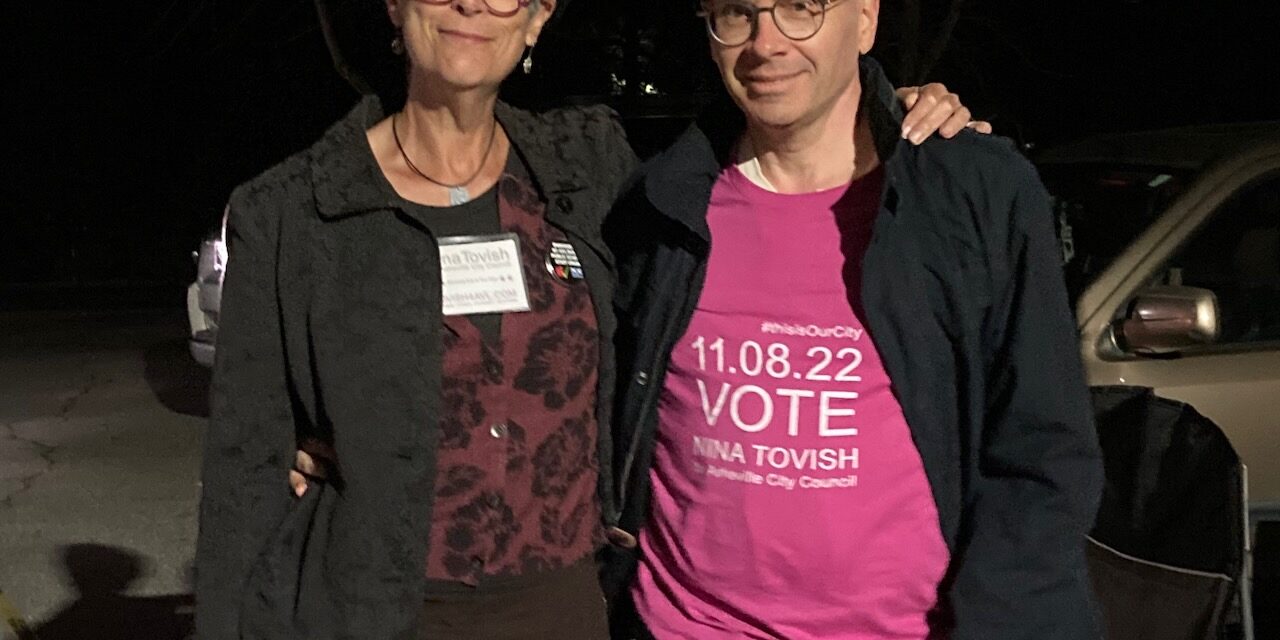 For me, Election Day started at Shiloh Community Center (Precinct 8.2), continued at Murphey-Oakley (9.1)—where I was lucky enough to share a moment with Jasmine Beach-Ferrara, followed by a stint at West Asheville Library (16.2), a sojourn at T.C. Roberson (18.2), and then closing out the day at the polls at Bob’s and my home precinct at Faith Tabernacle (8.3).

Bob & I went to the Orange Peel to await results with the Buncombe Democratic Party. They were not what we or my wonderful supporters and friends hoped for.

I take some solace that of all the candidates, I improved my vote by the greatest percent between the primary and the general election. That’s because I worked hard, and also because of the heroic efforts of my wonderful team: Cheryl Orengo (Campaign Coordinator), Ron Gordon (Treasurer), and my fantastic squad of volunteers who poll-greeted during Early Voting and on Election Day: Rob Heskett, Sophie Min Mullinax, Kim Hughes, Sherry Vaughn, Ruby Warren, Lori Hedrick, Mike Wasmer, Micah Massey, Anne Craig, Alan Rosenthal, Beverly Clark, and Mary Standaert… and all the others who contributed time and treasure throughout the campaign. I will never forget your generosity and kindness.

No campaign is complete without either a victory or a concession speech. Bob was on hand to video mine at the Orange Peel.

And no summing up is complete without my deep and lasting gratitude to Bob Woolley, who stuck with me unfailingly, without complaint, through 7+ months of this effort. Without his love and support I could not have gone on this amazing journey. Thank you, my love.

"Just like that, I executed a wild animal that had done me no harm. Admire my manliness!" 🙄🤮🙄

On the face of it, this City claim seems blatantly unconstitutional.

...Since then the city manager has openly stated that the cops decide who counts as a journalist in Asheville. Everyone in our town should find this chilling... #avlgov #avlnews

The moment @DiamondforNC learned she won her race, preventing a rightwing supermajority in the North Carolina House. She was a #GiveSmart recipient, who won her race by ~400 votes! https://twitter.com/DiamondForNC/status/1590453370510536704

Our campaign wasn’t just a campaign. It was a movement. Communities with little in common but a desire for something better for the next generation came together.