I was honored to participate in a Forum at Black Wall St. AVL, just for City Council candidates. Five of us in the City Council race were present, Councilmember Shaneika Smith did not attend.

This post includes videos of my responses to the questions posed to every candidate. You’ll notice we had some challenges with a balky microphone, so the audio less than optimal. (There was also a backlighting challenge that became more noticeable as the evening went on.)

At the beginning, each of us was asked to introduce ourselves and talk about our previous involvement in politics.

A technical snafu prevented the recording of one of my answers, the rest are available below.

The Coalition of Asheville Neighborhoods (CAN) held a forum at the East Asheville Public Library, in the evening. It included candidates for Mayor, City Council, County Commission, and Sheriff, and it ran from 7pm to after 10pm.

Four of us in the City Council race were present, the two incumbents did not attend.

I’ll update this post with a link to the full video, as recorded by CAN. In the meantime, here are videos of just my responses to the questions posed to Council candidates (or at-large to all).

At the beginning, each of us was asked to introduce ourselves and explain what we understood the concept of neighborhood resilience to be.

Honestly, I don’t remember off the top of my head what the order of these topics were, so I’ll just let you browse through the remaining five segments. They have the virtue of being short!

Why? Because Council and City staff have apparently moved forward with a pilot version based on the original realignment proposal that the group roundly rejected early on. Because staff told us that they had heard us and were pressing pause, rebooting, and starting from scratch so that we could actually have meaningful input. Because we were given the impression that our participation was going to provide actual guidance on how the process moved forward.

Apparently this was pure placation. Council and Staff have launched a pilot effort “on a separate track.”

We had asked that the City do what they should have done from the start: survey past and present Board & Commission members about their experiences in serving to determine what is and what isn’t working well with the current system, and to solicit ideas for what could be improved. Staff drafted up a survey based on some preliminary input and circulated it for our review. Before the meeting I sent an email to all participants and City Staff with my notes and suggested revisions/additions. I invited participants to comment and as you can see, they did so.

During the meeting, it seemed evident that Staff wanted to just move on to sending out the survey, and only to current B&C members. They said they had no record of past members’ contact information (!!!!!) and so they couldn’t survey people from pre-pandemic years. Participants in the working group assured the City staff that they could pull together a comprehensive list, given a bit of time. (I have an address book that goes back at least 40 years. I am seriously shocked by the revelation that the City doesn’t keep good enough records to have names, addresses, and contact info for everyone who has served.)

Once again, there was substantial push-back from the Working Group attendees. The meeting and pre-meeting materials were not accessible to all (as mentioned by a sight-impaired member). We were collectively blindsided by the revelation that a pilot based on what we considered to be a flawed model was already underway, complete with subordinating one B/C to another (AHAC to HDC). And we were surprised by the Staff’s expectation that we were going to rubber-stamp their draft survey.

In the end, the outcomes of the meeting were these:

I asked staff to create a single document with all the proposed questions (combining the draft survey, suggestions from the previous session, and from my ‘notes’ document) for us to edit together. I hope they will move expeditiously to do so. I didn’t want the work, going forward, to be living on my google drive. It should be a City-owned process.

The video of the meeting, chat capture, a clean PDF of the draft survey—I cobbled one together and posted it to my Google drive before the meeting, but it’s messy—are all supposed to be posted on the Working Group’s project page, but they’re not, yet. (Nor is the June Working Group meeting.)

I’m trying to be as dispassionate as I can about this, but I know I’m not alone in the working group in my reaction to how this going. We are disappointed. We feel we have been snowed. The “separate track” is essentially the initial implementation of the approach our group has deep and appropriate concerns about. I wouldn’t be surprised if Council and Staff ended up presenting it (the “separate track”) as a successful ‘fait accompli’ and the subsequent disregard of any results we get from a comprehensive survey—if in fact we ever get to do one.

As a City, we deserve better. We deserve real transparency. We deserve the processes of our government to be accessible and responsive. We deserve good record-keeping. (Seriously, the reason given for not having contact info was that “it has to be entered manually” — where oh where is my fainting couch? Manually!?! Perish the thought! Amazingly, I have an address book that’s decades old and has hundreds of entries, all of which I’ve made manually, can you imagine the toil?)

Most of all, we deserve to be able to trust that representations made to us about how our participation will be incorporated into decisions will actually be honored. I’m particularly outraged on behalf of all those in the Working Group who have also served on Boards & Commissions, giving freely of their time and expertise for the betterment of our city, and are now having their further willingness to contribute treated so cavalierly.

So, this is already too long. I’ve undoubtedly gotten some details wrong, and I’ve surely expressed myself with more candor and snark than is particularly wise. The Working Group is currently scheduled to run through September. I hope we can turn this around, but I’m not especially optimistic just now. 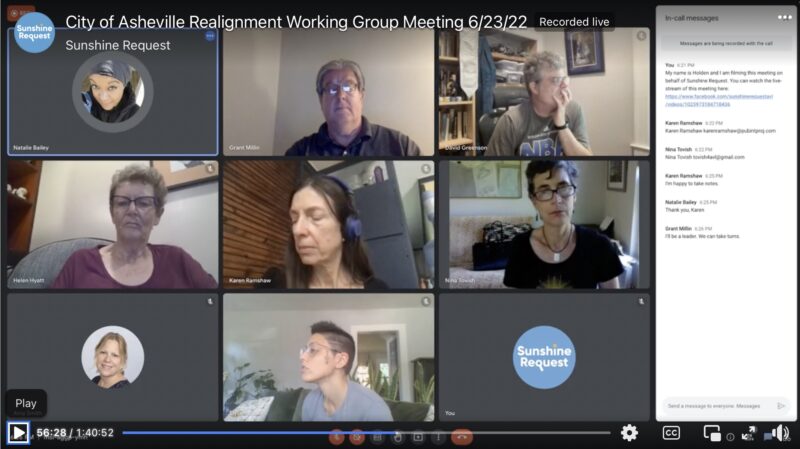 This ‘Realigning’ Boards & Commissions working group meeting represented a new approach from city staff. It will be interesting to see whether the input of the members actually makes any difference to the outcome.

There was a main meeting, then four break-out groups. You can watch the video here (on Facebook) — the video happens to follow the group I was in.

What is Good Governance?

Some people think democratic government is a “set it and forget it” deal: you vote for the people who you believe will represent your interests and values, and then you trust them to do just that. History (and recent history, at that) shows that this is not enough to guarantee good government. A healthy democracy depends upon an informed citizenry that can take timely action to participate in the processes of government.

A genuine democracy affords people ongoing access to the machinery of government: it includes the public in policy and lawmaking; it informs them about its processes; it welcomes and facilitates their participation; it documents and publishes its deliberations and decisions.

Without robust and easily accessible support for informed participation, there is no true democracy because citizens can neither be heard nor hold their elected officials and government employees accountable for their actions.

Opaque government—no matter how well-meaning or benevolent—is tyranny. It arrogates to itself power that belongs in the hands of the electorate. It raises itself above the oversight of the people it is meant to serve. And it perpetuates the disempowerment of the most disadvantaged and excluded in our community.

A democratic government does the public’s work in public. It welcomes the eyes of the people on its operations. It shows its work; it monitors and shares the outcomes of its actions. A democratic government knows that sunshine is the best disinfectant, and that earned trust in its institutions is the lifeblood of a healthy democracy.

I urge this committee to recommend — and city council to adopt and implement — a robust Open Meetings Policy, like the one proposed today by Mr. Conant and Code for Asheville.

Wish I could have been there. Nursing my sick kitty.

We had so much fun meeting you all last night!

Thank you to everyone who stopped by.

Asheville homeless service providers and others address the longstanding 'busing rumor' suggesting its homeless population is bused in from elsewhere. https://www.citizen-times.com/story/news/local/2023/02/02/fact-check-is-ashevilles-growing-homeless-population-being-bused-in/69849267007/?utm_campaign=snd-autopilot

Your input is needed! 👇 With the successful launch of Buncombe County’s affordable parking program at the Coxe Avenue parking deck, the County wants to gauge interest in a similar initiative at the County-owned parking deck at 164 College St. https://www.buncombecounty.org/countycenter/news-detail.aspx?id=20490

You don’t have to watch the video of #TyreNichols being beaten by police.

You don’t have to subject yourself to that trauma.

It should not require another video of a Black human being dehumanized for anyone to understand that police brutality is an urgent, devastating issue.